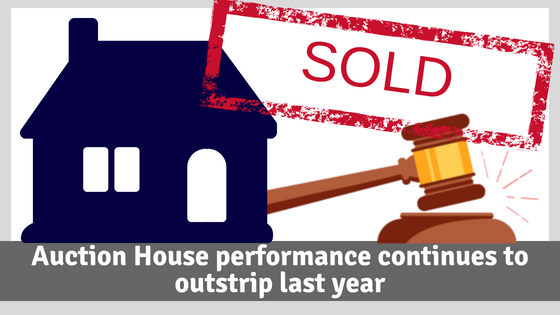 Following another successful selling month in May with 319 lots sold, Auction House – which has a branch in Leicestershire run by Readings Property Group based on Granby Street – has continued its strong performance in 2018, with cumulative results more than 6% ahead (6.26%) of 2017.

Commenting on the year so far, James Court, Director at Readings Property Group said: “At a time when the property market is going through a challenging period, we are pleased to report another strong set of figures, which are still ahead of last year’s results. Some of our auction rooms have been delivering success rates over 85% – which in this current climate is an amazing achievement.

“Recent entry numbers have been particularly good – boosted by some landlords choosing to exit the market, as well as other sellers turning to auction because they realise it’s the best way to achieve a speedy sale. In fact, the first few months of 2018 have been better than expected, and the auction sector is yet to suffer the stock shortage being experienced by estate agents across the country. Demand is strongest for properties requiring refurbishment and renovation, where we see a healthy demand in all our auction rooms nationwide.”

However, James Court sounded a note of caution about the summer months, saying that further challenges lay ahead. He explained: “We are operating in uncertain times. The winds of change are often seen first in auction rooms, and the reality is that vendor expectations may need to soften if we are to deliver the required results.

“The northern half of the country seems to be bearing up better than the southern half – but rather than being only for traders and regular investors, auctions are now open to all buyers. So we see opportunities on the horizon for shrewd buyers to pick up some bargains in the next few months.

“The message for sellers is that auctions are the fastest way to sell properties and land. We still have an active market, our rooms are well attended and my advice is that they should get their properties entered into our catalogues sooner rather than later.”